The time is 1989. The place is the panhandle of Florida. The riding spot for ages has been the only spot in all of Florida with the richest, reddest clay to build lips out of…..not the sand mix that the rest of the state has to suffer through- The Pitts in Pensacola, Florida. Some say The Pitts have been around since the 50’s….at least that’s what an elderly gentleman passed on to the locals when asked. Personally, I’m gonna go with since God created the earth as there wasn’t anything else there before them, so ya know. 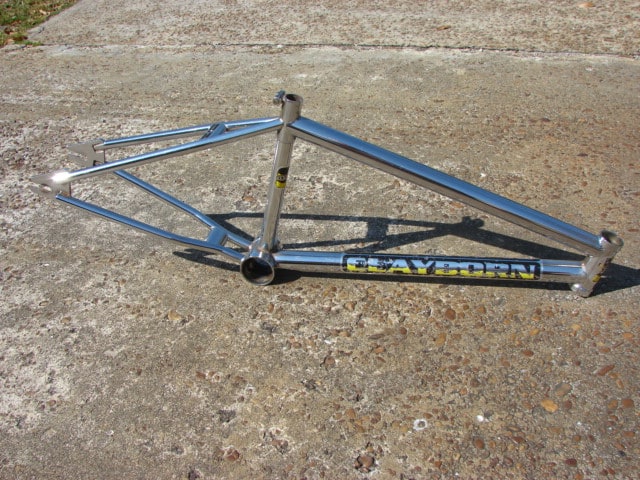 The 4 main locals that helped put the area on the BMX national map were Doug Schroeder, Scott Bernsden, Dalon Echols and Bill Madden. It was after countless riding sessions at this local spot that Scott and Doug came up with the idea to offer a bike that would last through endless abuse at the trails, yet still have the ability to go to a national and school the competition. They both approached Bill with the idea yet lacked a name for this venture. Wanting the name to reflect their riding spot, Bill coined the phrase ‘born from the clay’……thus the name Clayborn was an instant hit.

Since BIll was the local pro, It was only fitting that he was one of the first to start winning laps for Scott and Doug in 1990. This along with dirt jumper Vaun Stout and Scotty Clevenger from NC, Clayborn started to make a name for itsself as the frame of choice for people tired of breaking countless other ‘core’ bikes. Scott took over the reigns as life took Doug in new directions and continued the base of establishing Clayborn as a respectable name in BMX and dirt jumping well into the mid to late 90’s. That is, until life also was taking Scott in new directions that he felt was causing Clayborn to suffer some. Bill Madden was riding for Profile at this time but also wanted to take on a new challenge as XTRSKN was booming and the two reached an agreement and Clayborn was sold to Bill Madden early in 96.

Madden took Clayborn to national level awareness from 96 to 98 when Richard Bunt, saw that between racing professionally, running XTRSKN and Clayborn- Madden was wearing himself pretty thin. He made an offer to buy into the company and so the partnership began around winter of 97. Bunt and Madden proved the company in many ways, keeping production in the USA when everyone was jumping on the ‘Taiwan train’, sponsoring a winning team that launched the careers of some notable riders……Adam Streiby, Chris Duncan, Jeff Harrington, Bill Madden, and a relatively unknown kid from Alabama when he was battling it out in 14 ex….Barry Nobles- Alabama’s first and only AA Pro, and sticking to the thought of make it here in the states and offer the best product money can buy.

The late 90’s and early millenium saw this tiny team as legit as it gets with products and riders that were known and respected across the nation. Though big budgets were something they could only dream of, Clayborn’s team and frames were never part of any scandal or bashing…..rather the BMX world knew Clayborn was real as it gets. Eventually, Bunt purchased the rest of Clayborn from Madden as XTRSKN and Emerald Coast Dirt & Vert were already more than he could handle.

Products that came from the minds of Clayborn not only included the re-directed head tube, but the Clayborn block stem, ‘collared’ CrMo handlebars still can be found on bikes today at trails and tracks across the country. The pinnacle of accomplishments was the Clayborn ALX aluminum frame that is almost the exact frame offered today. A light yet burly strong aluminum frame capable of winning AA mains, then hours later sessioning the trails without fear of destroying a ‘race’ bike at the dirt jumps. Barry Nobles demonstrates this time after time as he is Clayborn’s AA Pro and can throw the latest style down at trails and skateparks across the nation.

Clayborn’s philosophy has been centered and focused on offering the highest quality frames that can be produced. That means that production is somewhat smaller than the big mega companies going overseas for keeping their overhead low. Clayborn instead focuses on making BMX frames the tried and true way of ‘hand made in the USA’ where BMX was born, bred and has grown into what we have today. Stop by and talk with the fine folks at Clayborn at a national event near you. You won’t get a sales pitch or ‘mass produced look-alike frame’ all made by the same manufacturer of the mega brands. You will get the facts the way they began way back- when BMX companies were founded on passion, sweat, hard work, superior product workmanship, and good ol’ southern hospitality. We’re glad you decided to take a look.

Please email us if you have any questions about our company or our products.